The City of High Point hosted #DemoDay to celebrate the beginning of the Multi-Use Stadium project. Over 1,000 people were in attendance at the corner of Church and Pine as the City provided t-shirts, pennants, baseballs, hot dogs and cracker jacks. Mayor Bill Bencini made the ceremonial "first pitch" to Mayor-Elect Jay Wagner, and the crowd witnessed the first building in the stadium footprint to be demolished. See the Demo Day sidebar on this page to view pictures and media coverage.

On December 5, 2017, representatives from the City of High Point appeared before the North Carolina Local Government Commission to request permission to issue limited obligation bonds for the stadium construction funding. The Commission unanimously approved. A great day for High Point!

The City Council on Wednesday unanimously approved a series of legal agreements clearing the way for a local foundation to operate the stadium and for an Atlantic League of Professional Baseball team to play 70 games a year in the downtown facility beginning in May 2019.

The City of High Point with the members of High Point Baseball held a Groundbreaking Ceremony to celebrate the construction of the new Multi-Use Stadium. Over 800 people were in attendance to witness this historic event, where it was announced that the stadium will be named BB&T Point.

High Point Baseball will host five BB&T Point Progress Parties, beginning Thursday, June 7 at 6 p.m. This free community event will reveal the Top 9 Names and Top "Not 9" Names as submitted by fans to be the name of the High Point Atlantic League baseball team, with the final name announced on June 28. Each Progress Party will have a theme as well as tours to a specific spot on the construction site. Additional party dates are July 12, August 2, September 6 and October 4.

High Point Baseball held its second BB&T Point Progress Party on July 12. The fans have voted the top three names and the decision was made to name the team the High Point Rockers! www.highpointrockers.com

The Progress Party scheduled for today has been cancelled due to the weather.

The High Point Rockers will host their latest BB&T Point Progress Party on Thursday, September 6 with a special “Back to School” theme, complete with giveaways, food and entertainment. This free, community event will take place at the current home of the team offices, 214 Lindsay Street, in downtown High Point from 6 - 8 p.m. A special ceremony will cap off the evening as the Samet Construction crew will raise a symbolic “rocker chair” to the roof of BB&T Point.

The High Point Rockers today announced a spooky theme for their fifth, and final, BB&T Point Progress Party scheduled to be held on Thursday, October 4 from 6 - 8 p.m. in downtown High Point. The team offices, located at 214 Lindsay Street, will be turned in to a “Haunted Home” that fans must bravely maneuver before reaching the actual party in the parking lot next door. However, the scares won’t stop once exiting the house as folks will then have to traverse the Atlantic League Graveyard and Garage of Horrors.

The High Point Rockers are excited and honored to have Jamie Keefe, a 16-year veteran Manager of Independent Baseball, and Frank Viola, the 1987 World Series MVP and 1988 Cy Young winner, join our staff for the 2019 season!  Visit www.highpointrockers.com for more information.

We have installed a second camera on the top of Plant 7 near the project area.  Check out the live look in above or share this link with your friends! https://app.truelook.com/?u=hc1533652938

On January 9, Tim Elliott of Elliott Sidewalk Communities announced the development of the first building around the catalyst project. Market Center, a $10 million office and retail building that will open in April 2020, will be a 52,000 square foot, three-story structure housing a brew pup, office space and retail. 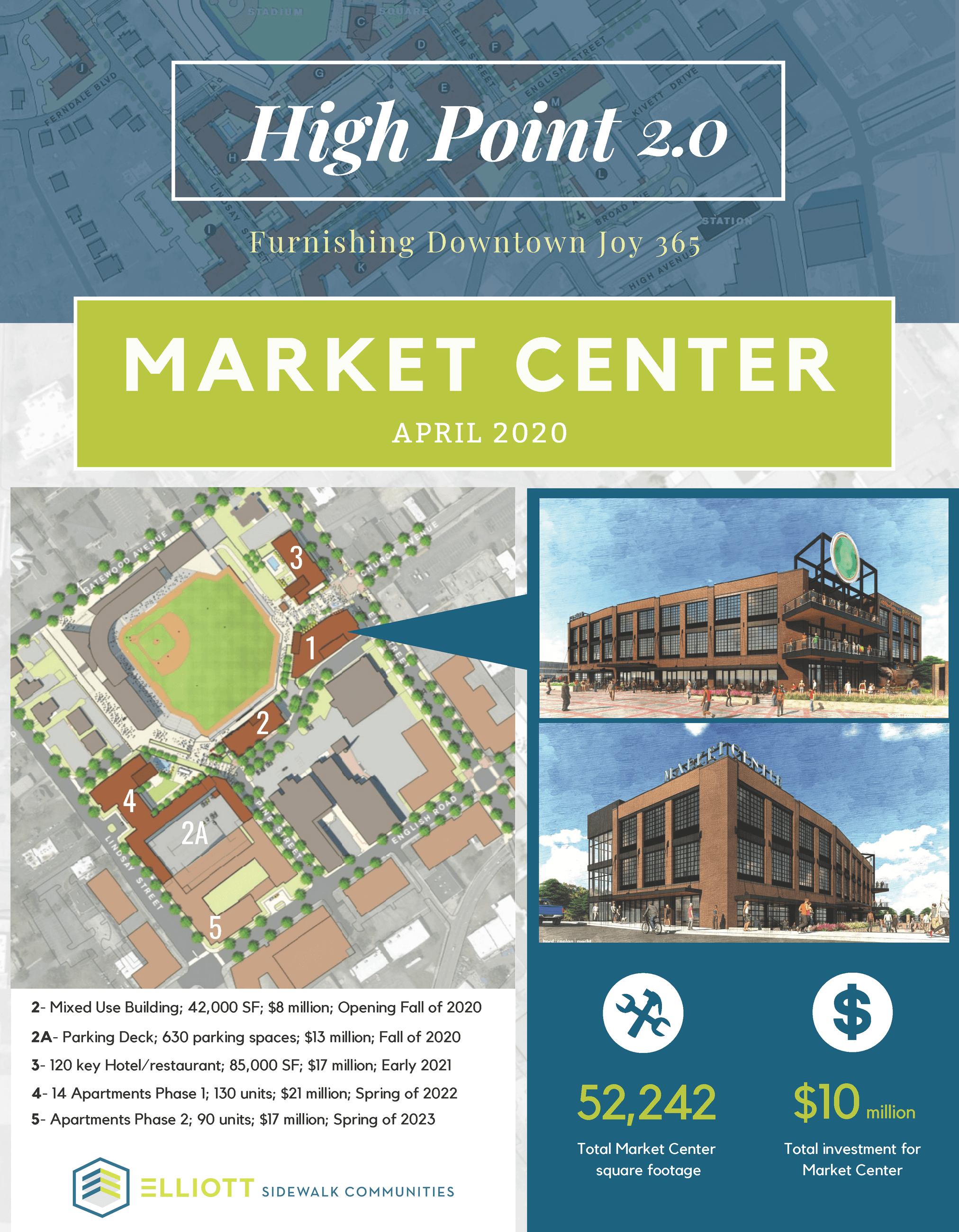 HIGH POINT, NC – The High Point Rockers continued to add to their inaugural season roster, signing the first former Major Leaguer in franchise history. Seth Maness, a right-handed pitcher with five years of “big league” experience, joins the Rockers and returns to his home state to pitch for the first time in his professional career. Maness joins a Rockers team that has already put an impressive group together as each player, and member of the coaching staff, has won a championship at some point in their professional career.

“We are ecstatic that Seth has chosen High Point as the place to continue his professional career in 2019,” said Rockers Manager, Jamie Keefe. “Seth’s signing here is an example of the talent-rich state that North Carolina is. We are looking forward to having a player of his caliber come home to pitch for the Rockers.”

Born in Pinehurst, NC, the 30-year-old starred at East Carolina University where he was drafted twice, including in the 11th round of the 2011 MLB draft by the St. Louis Cardinals. The righty spent two years in the Cardinals farm system, winning a Midwest League title with Quad Cities in 2011 and being named the Cardinals’ Minor League Pitcher of the Year in 2012, before making his Major League debut on May 3rd, 2013 for St. Louis. His career started well as he pitched a perfect inning against the Milwaukee Brewers in a 6-1 Cardinals win.

Having Seth on our staff is quite exciting,” Rockers Pitching Coach Frank Viola commented. “He gives us another experienced arm and his Major League numbers speak for themselves. He’s a local guy who will be fun to watch.”