Street sweeping is one of the most visible aspects of the Public Services Department. Under the City of High Point’s Phase II NPDES permit, the City is required to implement Best Management Practices in order to maintain streets and reduce pollutants caused by stormwater runoff. The street sweeping program is the first line of defense in protecting waterways by keeping the stormwater collection system clean. The purpose of the street sweeping program is to keep the City of High Point’s streets clean while removing sediment and associated contaminates before they enter the stormwater system and eventually streams.
Routes
The Stormwater Services Division currently operates 3 street sweepers year-round to sweep curb and gutter streets within the City of High Point. Routes can be found on the Street Sweeping Routes Map (PDF). The Central Business District (241 curb miles) is swept 6 times annually, 4 times during the normal routes, and twice during the fall and spring furniture markets.

The City does miscellaneous sweeping of streets during the season as required to keep excessive dirt from the streets. In the fall, usually near the beginning of October, the City will monitor and sweep areas as necessary to keep leaves and debris from plugging stormwater catch basins. 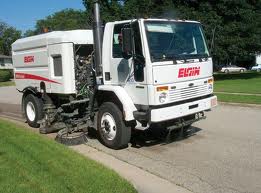 How You Can Help Our Street Sweepers