High Point Theatre
Join in a standing ovation at The High Point Theatre, a year-round performing and visual arts complex owned and operated by the City of High Point. The complex represents one of the nation's first cooperative ventures among municipal government, private enterprise, and the arts. Touring artists provide a wide range of stage performances to patrons in a 965-seat auditorium.

Enrichment Series
The High Point University Community Enrichment Series offers a wide-range of concerts, plays, speakers, art and more. The series is complimentary and open to the public. 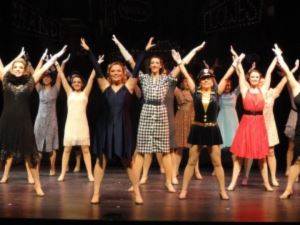 High Point Community Theatre 42nd Street finale
Get Involved
Kindle your own creative spirit with community-based productions. Three High Point Area Arts Council affiliates present a number of performing art events in and around High Point for the young and the young at heart.
Hayworth Fine Arts Center
Marvel at the design of the Hayworth Fine Arts Center on the High Point University campus. Inspired by Her Majesty’s Theatre in London, the center of the building is a 500-seat performance hall, home to the University Tower Players. The state-of-the-art venue hosts a variety of performances presented by touring artists. The east wing of the Arts Center is the permanent home of the Darrell Sechrest Gallery of Art and also features touring art exhibits.

Summer Concert Series
Sit back and relax under the stars to Pops in the Park summer concert series or keep with the beat at the Eastern Music Festival.

Musical Performances
Listen to the symphony or enjoy a play year-round. The Winston-Salem Symphony, the Philharmonic Orchestra, the University of North Carolina School of the Arts, and a variety of touring performers provide concerts and plays throughout the year at the Stevens Center and the Lawrence Joel Coliseum Theatre in Winston-Salem.


The Greensboro Symphony, Youth Orchestra, Opera Company, and Best of Broadway touring series are presented throughout the year, and a new Greensboro performing arts center is under construction. These opportunities are within a 30-minute drive from High Point.
Pay a Bill
Public Records
Notify Me®
Employment
[]